Having been a veterinarian for 20 years, I often come across some interesting trivia related to the animal world. I thought I would share a Fancy Few Frivolous Feline Facts!

Domestic cats spend about 70% of their lives asleep. These are usually in short snatches or "cat naps". This works out to be about sixteen hours a day – much the same as a newborn baby.

Cats are "obligate carnivores" which mean they need animal protein to survive. They do not crave sweet food as they have only around 500 taste buds as opposed to us with over 10,000.

Cats of course aren't native to Australia. They came from Europe with the first settlers. Because of this genetic stock, our cats are on average 1.5kg heavier than American cats and are also less susceptible to some infectious diseases like the Leukaemia virus. As well, most Australian cats do not get the euphoric effect of the grass "Catnip" like their American cousins.

Until recently, the cat was believed to have been first domesticated in Egypt. In 1994 however, archaeologists discovered a cat buried with a person at a New Stone Age site in Cyprus. In fact, wild cats have been snooping around grain storage areas looking for mice in ancient Persia.

CLCK HERE For some fun have a look at the video of my cats having a play with the cat toy called 'Da bird '. They are called Gilbert and Artie or G1 & G2 for short . 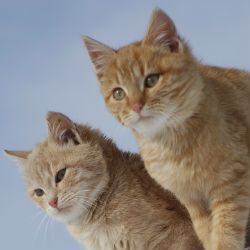 You be the Vet : Teeth Problems
Your Pets Digital Age is Here