Lilly Rose came to see us because she had gone from her normal self to not wanting to move. 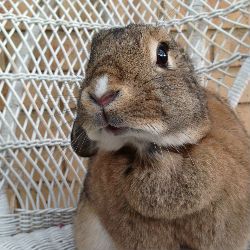 Lilly Rose came to see us because she had gone from her normal self to not wanting to move, being off her food and with very wet faeces over about 3 days. She had also started to look quite bloated. On presentation to us, we could feel two large firm structures within her abdomen, which had us very concerned, so we admitted her straight away so we could take some xrays and perform an ultrasound to have a better look at what was going on inside her abdomen. These revealed a large, fluid filled uterus.

There are two possible causes of this – a severe infection of the womb (uterus) called pyometra, or cancer of the uterus. Treatment for both of these conditions includes emergency surgery to remove the uterus. Female rabbits who are not desexed have a very high rate of cancer in the uterus, in which case the prognosis is poor. As Lilly Rose was 3 years old, we were prepared for the worst. We took Lilly Rose to surgery and removed her uterus. We sent the uterus off for pathology, as this would tell us whether we were dealing with cancer or infection. Lilly Rose stayed in hospital for a few days after surgery while she recovered. It didn’t take long for her to return to her sassy self! The pathology results came back saying that she had pyometra, not cancer, which was a great relief to all of us! She returned home to her family and has made a full recovery.