Brave Pet of the Month: Jazz

Jazz is our Brave Pet for October. Her owner brought her to see us as she had been very lethargic. 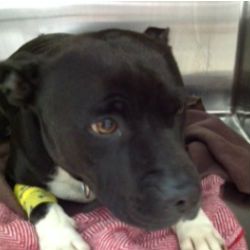 Jazz is our Brave Pet for October. Her owner brought her to see us as she had been very lethargic, was dehydrated and her tummy was very sore and starting to become distended.

She had come off heat a few weeks ago, but her owner noticed that her heat period was atypically longer than usual going longer than 4 weeks.

On the same day as the consultation, Jazz was admitted to hospital.

As we processed her blood test on site, the results were with us in minutes allowing the team to treat her straight away. Jazz was fighting an overwhelming infection. An immediate ultrasound examination of her abdomen quickly revealed that she had a very swollen uterus (womb) and a condition called pyometra.

We immediately took her to emergency surgery to remove the heavily infected uterus. She stayed in hospital overnight on a fluid drip to support her circulation and help her recover from the surgery. After an intensive 24 hours she was back with her grateful owner.

After her close call with death, she’s now back to bouncing around the house and scoffing her food.

Pyometra unfortunately is a relatively common condition we see. This condition is easily avoided by getting your pet desexed before 6 months of age (before their first period).

Desexing: Makes Your Pet Live Longer
Rabbits and Guinea Pigs Get Parasites Too!